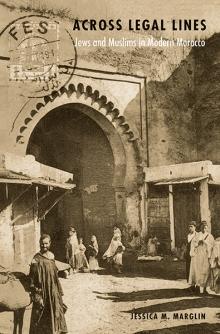 Across Legal Lines: Jews and Muslims in Modern Morocco

A previously untold story of Jewish-Muslim relations in modern Morocco, showing how law facilitated Jews’ integration into the broader Moroccan society in which they lived

Morocco went through immense upheaval in the nineteenth and early twentieth centuries. Through the experiences of a single Jewish family, Jessica Marglin charts how the law helped Jews to integrate into Muslim society—until colonial reforms abruptly curtailed their legal mobility. Drawing on a broad range of archival documents, Marglin expands our understanding of contemporary relations between Jews and Muslims and changes the way we think about Jewish history, the Middle East, and the nature of legal pluralism.

1 The Legal World of Moroccan Jews

2 The Law of the Market

5 Appeals in an International Age

“Jessica Marglin has achieved nothing less than a complete revision of the way that we view the Moroccan legal system in the late nineteenth century from the viewpoint of its Muslim and Jewish clients.”—Susan Gilson Miller, University of California, Davis

“This is an important book that deserves a wide readership. Through a vivid portrait of a Jewish family’s entanglement with the law in pre-colonial Morocco, it puts to rest die-hard tales about colonial modernization and the perennial animosity between Muslims and Jews.”—Francesca Trivellato, author of The Familiarity of Strangers: The Sephardic Diaspora, Livorno, and Cross-Cultural Trade in the Early Modern Period

“With great erudition, insight, and empathy, Marglin dexterously charts a cultural world of precolonial North Africa in which individuals navigate a complex legal landscape. This is an essential book for scholars of North African and Middle Eastern Jewries, Morocco, the cultural history of law, and the legal history of culture.”—Sarah Abrevaya Stein, author of Extraterritorial Dreams

"Jessica Marglin's pathbreaking book sheds dramatic new light on the social, economic, and legal history of nineteenth century Morocco. Marglin deftly reconstructs the everyday ties by which Muslim and Jewish law and litigants accommodated each other in an unequal but integrated society." —James McDougall, Trinity College, University of Oxford

“It is rather unusual for a maiden book by a young scholar to profoundly force a reversal of commonly held concepts in a specific field of studies. . . . This is one of those rare exceptions. . . . Essential.”—Choice

Winner of 2017 Book Prize in category of Sephardic Culture