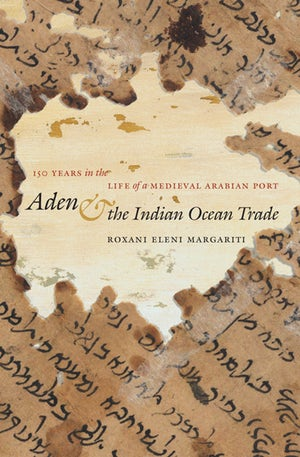 Aden and the Indian Ocean Trade: 150 Years in the Life of a Medieval Arabian Port

Positioned at the crossroads of the maritime routes linking the Indian Ocean and the Mediterranean Sea, the Yemeni port of Aden grew to be one of the medieval world's greatest commercial hubs. Approaching Aden's history between the eleventh and thirteenth centuries through the prism of overseas trade and commercial culture, Roxani Eleni Margariti examines the ways in which physical space and urban institutions developed to serve and harness the commercial potential presented by the city's strategic location.

Utilizing historical and archaeological methods, Margariti draws together a rich variety of sources far beyond the normative and relatively accessible legal rulings issued by Islamic courts of the time. She explores environmental, material, and textual data, including merchants' testimonies from the medieval documentary repository known as the Cairo Geniza. Her analysis brings the port city to life, detailing its fortifications, water supply, harbor, customs house, marketplaces, and ship-building facilities. She also provides a broader picture of the history of the city and the ways merchants and administrators regulated and fostered trade. Margariti ultimately demonstrates how port cities, as nodes of exchange, communication, and interconnectedness, are crucial in Indian Ocean and Middle Eastern history as well as Islamic and Jewish history.

“An interesting book. . . . Uses primary sources well to construct a detailed analysis of the port of Aden and of its commercial activity. . . . A useful contribution to the scholarship on this area.”--The Historian

“Well-researched. . . . A welcome addition to the never-completed work on the Indian Ocean trade.”--Journal of Interdisciplinary History

“[A] work of formidable scholarship. . . . Recommended.”--CHOICE

“Notable for its broad use of both archeological sources and medieval Judeo-Arabic documents, which provide a crucial window into both Aden and the Indian Ocean trade.”--Middle East Journal

“[A] major contribution to scholarly understanding of seaborne trade in the medieval period, not only in the Indian Ocean, Red Sea, and the Gulf. . . . A very readable book.”--Quaderni di Studi Indo-Mediterraei