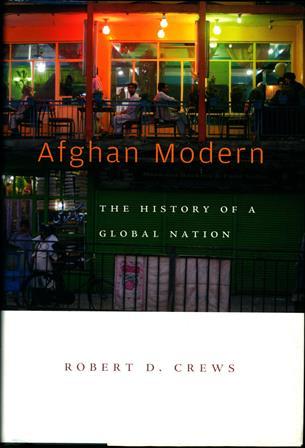 Afghan Modern: The History of a Global Nation

Book
Abstract
“Rugged, remote, riven by tribal rivalries and religious violence, Afghanistan seems to many a country frozen in time and forsaken by the world. Afghan Modern presents a bold challenge to these misperceptions, revealing how Afghans, over the course of their history, have engaged and connected with a wider world and come to share in our modern globalized age.

Always a mobile people, Afghan travelers, traders, pilgrims, scholars, and artists have ventured abroad for centuries, their cosmopolitan sensibilities providing a compass for navigating a constantly changing world. Robert Crews traces the roots of Afghan globalism to the early modern period, when, as the subjects of sprawling empires, the residents of Kabul, Kandahar, and other urban centers forged linkages with far-flung imperial centers throughout the Middle East and Asia. Focusing on the emergence of an Afghan state out of this imperial milieu, he shows how Afghan nation-making was part of a series of global processes, refuting the usual portrayal of Afghans as pawns in the “Great Game” of European powers and of Afghanistan as a “hermit kingdom.”

In the twentieth century, the pace of Afghan interaction with the rest of the world dramatically increased, and many Afghan men and women came to see themselves at the center of ideological struggles that spanned the globe. Through revolution, war, and foreign occupations, Afghanistan became even more enmeshed in the global circulation of modern politics, occupying a pivotal position in the Cold War and the tumultuous decades that followed.”

8. At the Center of Humanity

“A comprehensive history of the country… [Crews] dispels the clichés that have attached themselves to our language and imagery of the country… Afghan Modern [is] required reading for generals, policy-makers, NGOs and journalists.”—Heidi Kingstone, Standpoint

“A fresh look at the Afghans that discards old legends and stereotypes and characterizes the people as tremendously mobile and cosmopolitan. Crews rejects the view of Afghanistan as ‘hopelessly archaic and insular’ and finds that it has been long and unfairly defined by foreign occupiers… An impressively thinking-outside-of-the-box approach to reconsidering this pivotal Asian nation and its people.”—Kirkus Reviews (starred review)

“In a remarkable achievement, Crews shows us how Afghanistan has been an integral part of imperial, international, and now global circuits of politics and culture. Clearing away tenacious stereotypes about Afghan society’s domination by tribe, clan, and village, he demonstrates why recent military and humanitarian interventions based on such categories have been disastrous and why Afghan nationalism is likely to survive the violent adventurism that has marked the country’s modern history.” —Faisal Devji, author of Muslim Zion and The Impossible Indian

“An exceptional book that, for the first time, places Afghan history on the global stage. Deeply researched and highly accessible, Afghan Modern illustrates the many ways that Afghan society has long been engaged with globalizing forces and explores how these forces shaped Afghanistan from the sixteenth century to the modern day.” —Scott C. Levi, author of Caravans: Indian Merchants on the Silk Road