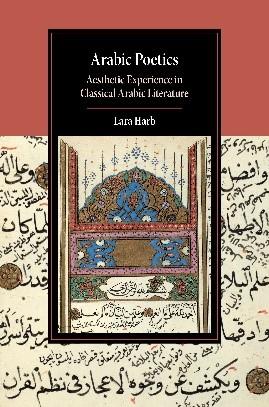 Finalist, 2021 Award for Excellence in the Study of Religion, Textual Studies, American Academy of Religion

Finalist, 2021 Sheikh Zayd Award for Arab Culture in Other Languages

What makes language beautiful? Arabic Poetics offers an answer to what this pertinent question looked like at the height of the Islamic civilization. In this novel argument, Lara Harb suggests that literary quality depended on the ability of linguistic expression to produce an experience of discovery and wonder in the listener. Analyzing theories of how rhetorical figures, simile, metaphor, and sentence construction are able to achieve this effect of wonder, Harb shows how this aesthetic theory, first articulated at the turn of the eleventh century CE, represented a major paradigm shift from earlier Arabic criticism which based its judgement on criteria of truthfulness and naturalness. In doing so, this study poses a major challenge to the misconception in modern scholarship that Arabic criticism was 'traditionalist' or 'static', exposing an elegant widespread conceptual framework of literary beauty in the post-eleventh-century Islamicate world which is central to poetic criticism, the interpretation of Aristotle's Poetics in Arabic philosophy and the rationale underlying discussions about the inimitability of the Quran.

Introduction
1. Wonder: a new paradigm
2. Wonder in Aristotelian Arabic poetics
3. Discovery in Bayān
4. Metaphor and the aesthetics of the sign
5. Naẓm, wonder, and the inimitability of the Quran
Epilogue. Faṣāḥa, balāgha, and poetic beauty.

'Lara Harb has reconstructed the development of literary theory in Arabic with unfailing lucidity, precision and a wealth of fascinating detail. Even as her book offers an illuminating account of such questions as poetic reasoning, the varieties of literary figures, and the status of the Qur’ān in Arabic culture, it advances the new and stimulating thesis, arguing that wonder, in Arabic poetics, becomes implicitly and explicitly 'the defining aesthetic experience of poetic language'.' Daniel Heller-Roazen, Princeton University, New Jersey

'A comprehensive work of classical Arabic philology and a beautifully written study of the art of literary criticism. Lara Harb shows how a millennium of scholarship in Arabic explained the wonder that readers feel as they journey through images in poetry: emotional experience catalyzed by formal innovation.' Alexander Key, Stanford University, California

'An insightful analysis of the aesthetics of muḥdath or 'modern' Arabic poetry … It chronicles a paradigm shift in literary criticism of the 10th-11th centuries, from a focus on the accuracy or truth of artistic representation to a focus on the poet’s ability to manipulate language and to create wonder. A truly fundamental contribution to Arabic literary studies.' Devin Stewart, Emory University, Atlanta