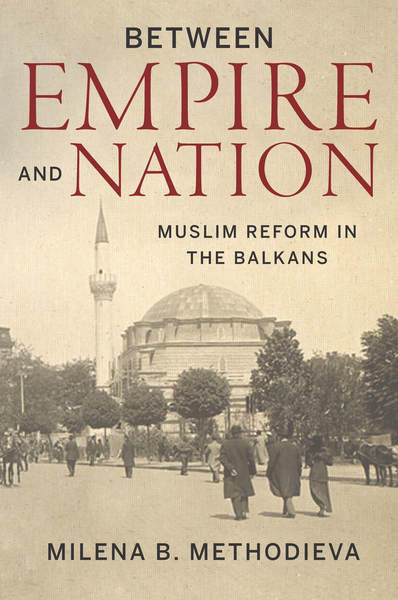 Between Empire and Nation: Muslim Reform in the Balkans

Between Empire and Nation tells the story of the transformation of the Muslim community in modern Bulgaria during a period of imperial dissolution, conflicting national and imperial enterprises, and the emergence of new national and ethnic identities. In 1878, the Ottoman empire relinquished large territories in the Balkans, with about 600,000 Muslims remaining in the newly-established Bulgarian state. Milena B. Methodieva explores how these former Ottoman subjects, now under Bulgarian rule, navigated between empire and nation-state, and sought to claim a place in the larger modern world.

Following the Russo-Ottoman war of 1877–1878, a movement for cultural reform and political mobilization gained momentum within Bulgaria's sizable Muslim population. From 1878 until the 1908 Young Turk revolution, this reform movement emerged as part of a struggle to redefine Muslim collective identity while engaging with broader intellectual and political trends of the time. Using a wide array of primary sources and drawing on both Ottoman and Eastern European historiographies, Methodieva approaches the question of Balkan Muslims' engagement with modernity through a transnational lens, arguing that the experience of this Muslim minority provides new insight into the nature of nationalism, citizenship, and state formation.

3 Doing Away with Empire

"Impressive and original, Between Empire and Nation shows how Muslims shaped the new Bulgarian order. Milena B. Methodieva reveals how Ottoman confessional communities became reconstituted as national minorities; how Ottoman social and political norms shaped societies that succeeded the empire; and how Bulgaria's Muslims maneuvered within a shifting international order to claim power—political, religious, and cultural—within their new polities. By connecting local Muslim movements to global networks, Methodieva redefines the people and places that shaped the early twentieth century."

"Milena B. Methodieva's carefully researched account of the history of the Muslim minority of Bulgaria invites us to rethink our key scholarly concepts from nationalism, cosmopolitanism, citizenship and minority rights to religious freedom and Pan-Islamism. This important new book is set to redefine the entanglements of modern history of Europe and the Middle East."