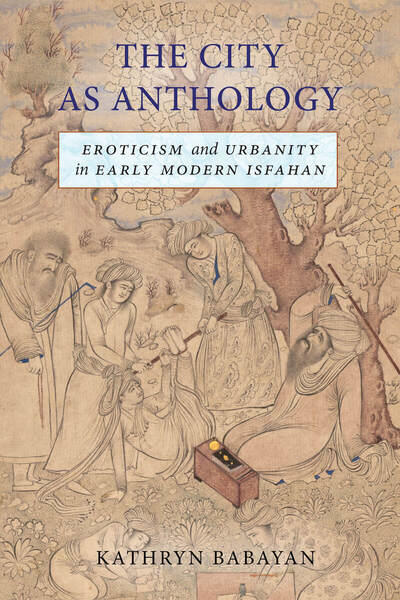 The City as Anthology: Eroticism and Urbanity in Early Modern Isfahan

Household anthologies of seventeenth-century Isfahan collected everyday texts and objects, from portraits, letters, and poems to marriage contracts and talismans. With these family collections, Kathryn Babayan tells a new history of the city at the transformative moment it became a cosmopolitan center of imperial rule. Bringing into view people's lives from a city with no extant state or civic archives, Babayan reimagines the archive of anthologies to recover how residents shaped their communities and crafted their urban, religious, and sexual selves.

Babayan highlights eight residents—from king to widow, painter to religious scholar, poet to bureaucrat—who anthologized their city, writing their engagements with friends and family, divulging the many dimensions of the social, cultural, and religious spheres of life in Isfahan. Through them, we see the gestures, manners, and sensibilities of a shared culture that configured their relations and negotiated the lines between friendship and eroticism. These entangled acts of seeing and reading, desiring and writing converge to fashion the refined urban self through the sensual and the sexual—and give us a new and enticing view of the city of Isfahan.

Introduction: The Adab of Urbanity

Conclusion: The Erotics of Urbanity

"The City as Anthology is a landmark of early modern history. It is both a generative model for future scholars and among the best portals to understanding Iran for readers at any level. A testament to Kathryn Babayan's status as one of the most engaging historians of Iran working today."—Shahzad Bashir, Brown University

"The City as Anthology is a surprising, nuanced, and deeply absorbing contribution to the history of sexuality and queer studies. Meticulously researched and elegantly argued, Kathryn Babayan's reading of early modern Isfahan by means of anthologies reveals a complex eroticism at the center of city life and its manuscript inscription."—Valerie Traub, University of Michigan

"In The City as Anthology, Kathryn Babayan masterfully demonstrates the intertwining of personhood, love, and sociability in early modern Iran. This innovative study sheds important light on the lives of literate Isfahanis who, through epistles, poems, and sketches, imagined a world at the threshold of modernity."—Kishwar Rizvi, Yale University