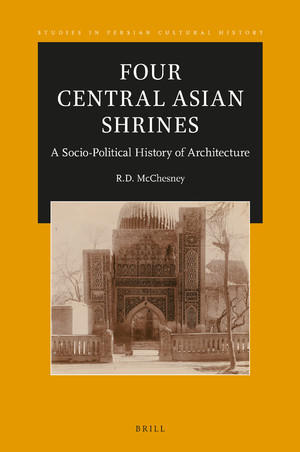 In Central Asia, Muslim shrines have served as community centers for centuries, particularly the large urban shrines that seem, in many cases, to have served as the inspiration as well for a city’s architectural development. In Four Central Asian Shrines: A Socio-Political History of Architecture R. D. McChesney documents the histories of four such long-standing shrines—Gur-i Mir at Samarqand, Khwajah Abu Nasr Parsa Mazar at Balkh, the Noble Rawzah at Mazar-i Sharif, and the Khirqat al-Nabi at Qandahar. In all four cases the creation and evolution of the architecture of these shrines is traced through narratives about their social and political histories and in the past century and a half, through the photographic record.

Chapter 3 Centering a City (2): The Noble Rawzah of Mazar-i Sharif

Chapter 4 The Shrine of the Prophet’s Cloak, the Khirqat al-Nabī of Qandahar