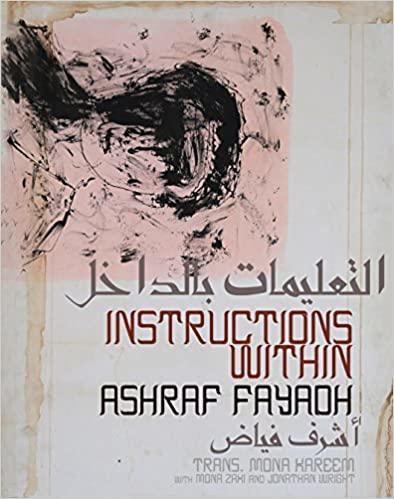 Longlisted for the Best Translated Book Award for poetry.

The Operating System is honored to publish the first Arabic-English full translation of Ashraf Fayadh's singular volume of poetry, INSTRUCTIONS WITHIN, which was published by the Beirut- based Dar al-Farabi in 2008 and later banned from distribution in Saudi Arabia. This special edition includes two paintings by Ashraf Fayadh on its front and back covers, and is right bound, asking the reader to consider their estrangement from Arabic language, literature, and life, inviting a new relationship to begin to form. The Operating System will donate proceeds from sales of this book to support Fayadh's ongoing case for his release from imprisonment for apostasy as a response to these very verses in Saudi Arabia.

"Why do you need to read this book in America today? Because a US journalist asked if it really was worth it to write poems that might get you killed. Because Ashraf Fayadh, as poet, artist and human being, is being jailed and tortured for doing his job, that is for daring to expose & deride the two-headed Moloch governing the country he lives in (Saudi Arabia) and ours (these States): Fundamentalist religion & oil-money. Because Ashraf Fayadh is inventing a needed poetics to break not only those taboos but also the shackles of standard Arab poetics, freeing the language—& a freed language is needed for free thinking. Because his own exile (he is of Palestinian extraction) is so absolute that it does not fit the traditional nostalgic poetics of exile & searches for a new way of saying a new & wilder dislocation. Because this exile is so close to all of our own dislocations, even as, smugly ensconced in our North American bunker, we don't see that the same future is awaiting us. Because he wrote: 'I am Hell's experiment on planet Earth.'"—Pierre Joris

"Palestinian poet, artist and cultural activist Ashraf Fayadh reminds us, through his life and work, that blasphemy (for which he has been sentenced to 8 years in prison and 800 lashes) is still a crime in Saudi Arabia, but also that poetry is powerful against the criminal madness of a deranged state: '...these pages have exhausted all languages known to earth / ...to offer a name that matches your definition of self / your name-like an inkwell pregnant with possibilities.' The Operating System does us an extraordinary service by making this magnificent poet's voice available. Read Fayadh to understand what we are fighting against, and for!"—Margaret Randall

"Just a few years before his death, the great poet Amiri Baraka railed against what he saw as a poetry of complacency, of 'the indoors,' and harkened back to those of his generation (and older), 'who actually worked to register some understanding of 'the great outdoors' i.e., the real world.' It is with more than some irony that we here, in the belly of the imperial beast, must seek such poetry of 'the great outdoors' from someone like Ashraf Fayadh, a Palestinian imprisoned in Saudi Arabia. Like the real world, Fayadh's poems are dizzying in their associations and resonance, recalling echoes of lines from different times, languages, and circumstances, from revery to exile, from brutality to utmost tenderness. Poet and artist Etel Adnan once wrote that 'Palestine is a land planted / by eyes refusing to be closed.' The poetry of Ashraf Fayadh, in a dream state of vigilance, attention, and horror, forces us to look at the world we actually inhabit, in all its glory and horror."—Ammiel Alcalay