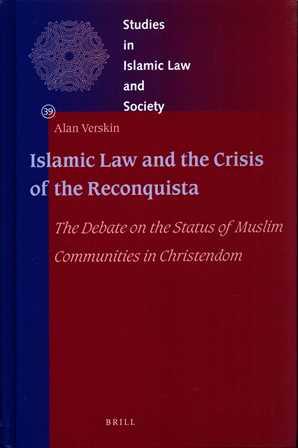 Islamic Law and the Crisis of the Reconquista: The Debate on the Status of Muslim Communities in Christendom

“The Reconquista left unprecedentedly large numbers of Muslims living under Christian rule. Since Islamic religious and legal institutions had been developed by scholars who lived under Muslim rule and who assumed this condition as a given, how Muslims should proceed in the absence of such rule became the subject of extensive intellectual investigation. In Islamic Law and the Crisis of the Reconquista, Alan Verskin examines the way in which the Iberian school of Mālikī law developed in response to the political, theological, and practical difficulties posed by the Reconquista. He shows how religious concepts, even those very central to the Islamic religious experience, could be rethought and reinterpreted in order to respond to the changing needs of Muslims.”

Acknowledgments
Introduction
1. The Concept of Hijra (Migration) in Medieval Iberia and the Maghrib
2. The Status of the Mudéjar Religious Leadership According to Mālikī Law
3. Life, Family and Property in the Abode of War
4. European Rule in the 19th-Century Maghrib and the Reception of Reconquista-Era Law
Conclusion
Appendices
Bibliography
Index