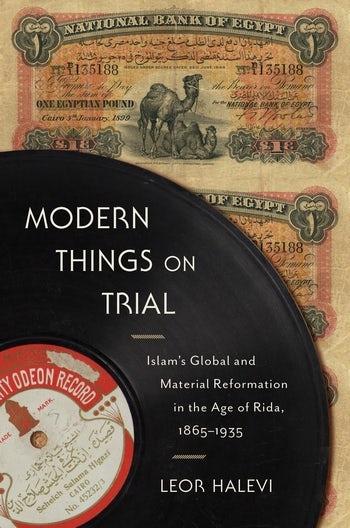 Modern Things on Trial: Islam’s Global and Material Reformation in the Age of Rida, 1865–1935

In cities awakening to global exchange under European imperial rule, Muslims encountered all sorts of strange and wonderful new things—synthetic toothbrushes, toilet paper, telegraphs, railways, gramophones, brimmed hats, tailored pants, and lottery tickets. The passage of these goods across cultural frontiers spurred passionate debates. Realizing that these goods were changing religious practices and values, proponents and critics wondered what to outlaw and what to permit.

In this book, Leor Halevi tells the story of the Islamic trials of technological and commercial innovations of the late nineteenth and early twentieth centuries. He focuses on the communications of an entrepreneurial Syrian interpreter of the shariʿa named Rashid Rida, who became a renowned reformer by responding to the demand for authoritative and authentic religious advice. Upon migrating to Egypt, Rida founded an Islamic magazine, The Lighthouse, which cultivated an educated, prosperous readership within and beyond the British Empire. To an audience eager to know if their scriptures sanctioned particular interactions with particular objects, he preached the message that by rediscovering Islam’s foundational spirit, the global community of Muslims would thrive and realize modernity’s religious and secular promises.

Through analysis of Rida’s international correspondence, Halevi argues that religious entanglements with new commodities and technologies were the driving forces behind local and global projects to reform the Islamic legal tradition. Shedding light on culture, commerce, and consumption in Cairo and other colonial cities, Modern Things on Trial is a groundbreaking account of Islam’s material transformation in a globalizing era.

List of Maps and Figures
Acknowledgments
Prologue: The Parable of the Montgolfière and the Translation of Haleby’s Corpse
Introduction: Good Things Made Lawful: Euro-Muslim Objects and Laissez-Faire Fatwas
1. The Toilet Paper Fatwa: Hygienic Innovation and the Sacred Law in the Late Imperial Era
2. Fatwas for the Partners’ Club: A Global Mufti’s Enterprise
3. In a Material World: European Expansion from Tripoli to Cairo
4. Paper Money and Consummate Men: Capitalism and the Rise of Laissez-Faire Salafism
5. The Qurʾan in the Gramophone: Sounds of Islamic Modernity from Cairo to Kazan
6. Telegraphs, Photographs, Railways, Law Codes: Tools of Empire, Tools of Islam
7. Arabian Slippers: The Turn to Nationalistic Consumption
8. Lottery Tickets, Luxury Hotels, and Christian Experts: Economic Liberalism Versus Islamic Exclusivism in a Territorial Framework
Conclusions
Notes
Selected Bibliography
Index

Leor Halevi's original study offers important perspectives on turn of the twentieth-century Islamic reformist thought in the context of changing relations between law and material history. He matches up instructive readings in legal opinions delivered in Cairo by Rashid Rida with innovative background research on the new products and technologies that prompted questions to him from around the Muslim world. Brinkley Messick, author of Sharīʿa Scripts: A Historical Anthropology

This nuanced, meticulously researched, yet accessible study illuminates how significant early-twentieth-century debates on Islamic law often revolved around some surprisingly ordinary objects and how local anxieties and input shaped a reformist Islam with transregional appeal. Halevi's focus on the material dimensions of modern Islamic thought adds a very welcome and promising dimension to the scholarship in this field. Muhammad Qasim Zaman, author of Islam in Pakistan: A History

By tracing the evolution of 'laissez-faire Salafism' in response to consumer concerns about the religious status of new commodities and technologies, Halevi positions Islam's modern reformation as driven more by materialist than ideational forces. This is a highly original rethinking of the old question of religion and modernity by looking at the material transformations—the 'modern things'—that Muslims acquired from the industrializing West. Nile Green, Ibn Khaldun Endowed Chair in World History, University of California, Los Angeles

This is a remarkable intervention by a pioneering scholar of Islamic law and material culture. Focusing on Rashid Rida, a leading light of modern Islamic reform, it highlights the material entanglements that catalyzed his legal rulings on novel commodities, technologies, and financial instruments. In place of dogmatism and idealism, what emerges is a riveting narrative of pragmatic and materialist accommodations in a period marked by the impact of capitalism, consumerism, and colonialism. This is revisionist history in the best sense. Finbarr Barry Flood, director of Silsila: Center for Material Histories, New York University

An outstanding work that sets a new standard for the writing of modern Islamic intellectual history...this book will prove of enduring interest to researchers in Islamic law and modern Islamic thought, historians of the late imperial and early nation-state Muslim worlds, and students of the processes of globalization more generally. American Journal of Islamic Social Sciences

Halevi sheds light on Islam’s relationship with modernity by offering an account of how Islamic revivalists first responded to modern transformations through religious and legal rulings. Middle East Journal