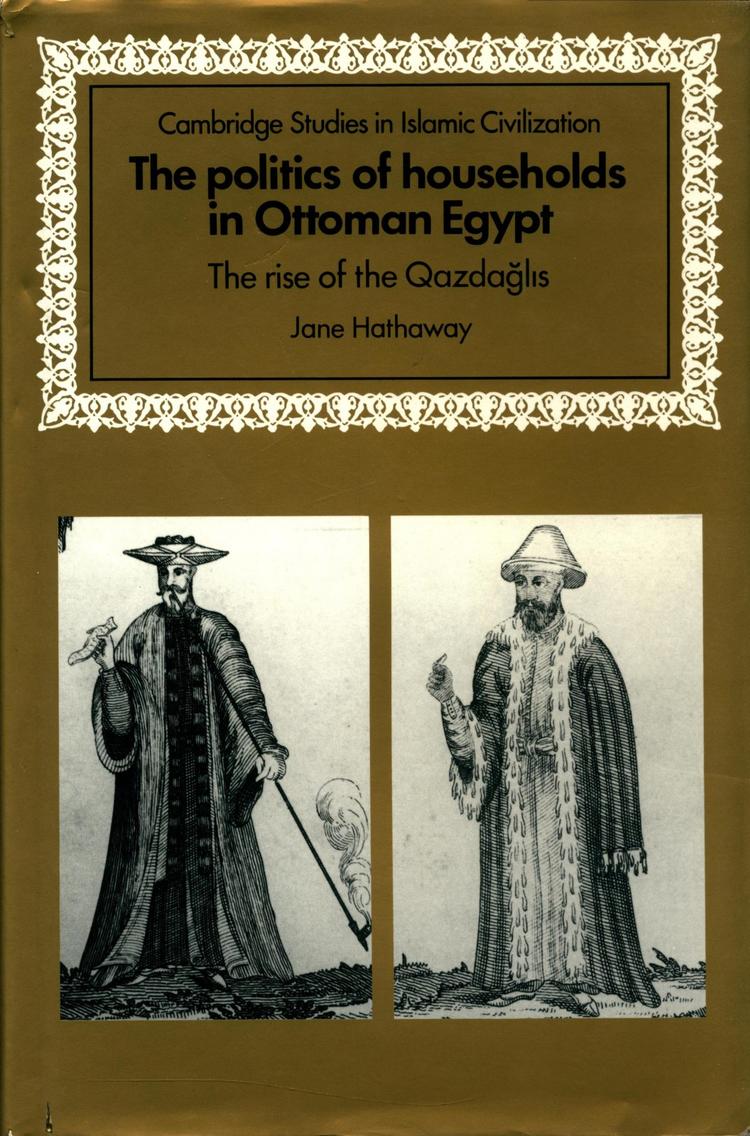 The Politics of Households in Ottoman Egypt: The Rise of the Qazdaglis

In a lucidly argued revisionist study of military society in Ottoman Egypt, Jane Hathaway contends that the basic framework within which this elite operated was the household, a conglomerate of patron-client ties. Using Turkish and Arabic archival sources, the author focuses on the Qazdagli household, a military group that came to dominate Egypt. This pioneering study will have a major impact on the understanding of Egyptian history, and will be essential reading for scholars in the field, and for premodern historians generally.

Introduction
1. Egypt's place in the Ottoman Empire
Part I. The Household and its Place in Ottoman Egypt's History:
2. The household
3. Transformations in seventeenth- and eighteenth-century Egyptian society
4. The emergence and partnership of the Qazdagli and Jalfi households
5. The ascendancy of Ibrahim Kahya al-Qazdagli and the emergence of the Qazdagli Beylicate
Part II. Qazdagli Household-Building Strategies:
6. Marriage alliances and the role of women in the household
7. Property and commercial partnerships
8. The Qazdaglis and the Chief Black eunuch
9. Conclusions.

“A fascinating and carefully argued book....this book significantly enriches and refines our understanding of both Egyptian and Ottoman history and sets a model of meticulous scholarship to be emulated by others.” Dina Le Gall, MESA Bulletin

“...this is an important book fo the new perspective it brings to the history of Egypt in the Ottoman period, and it will be necessary reading for graduate field exams.” Kenneth M. Cuno, Ph.D., Domes

“Hathaway has certainly made a contribution...in a careful study of a neglected century of Egyptian history.” Peter Gran, Int'l Jrnl of Middle East Studies

“The Politics of Households in Ottoman Egypt...makes a contribution to the history of Ottoman Egypt and in particular to the origins of the household that dominated 18th-century Egypt, the Qazdughli.” Mary Ann Fay, Middle East Journal

“[Hathaway's] book remains s very important contribution to our understanding of the history of political institiutions in the Ottoman Empire, particularly in the provinces. Furthermore, her critical evaluation of the texts, which represent the 'historical memory' of the seventeenth and eighteenth centuries, is an excellent example of a process through which every historian of the Middle East must go in order better to 'read' our sources. On the basis of these observations, this reviewer would recommend Hathaway's book for specialists in the field.” Historian

“Jane Hathaway has written an excellent book that puts the entire field of Middle Eastern studies in her debt...She bravely takes on received wisdom in the field, questions basic notions laid down by two generations of leading writers, and makes us reconsider our most cherished ideas about Janissaries, Mamluks, beys, agas, and households...Professor Hathaway should be commended on a neatly crafted, well-researched, and highly stimulating book.” Journal of the American Oriental Society, Ehud R. Toledano, Tel-Aviv University