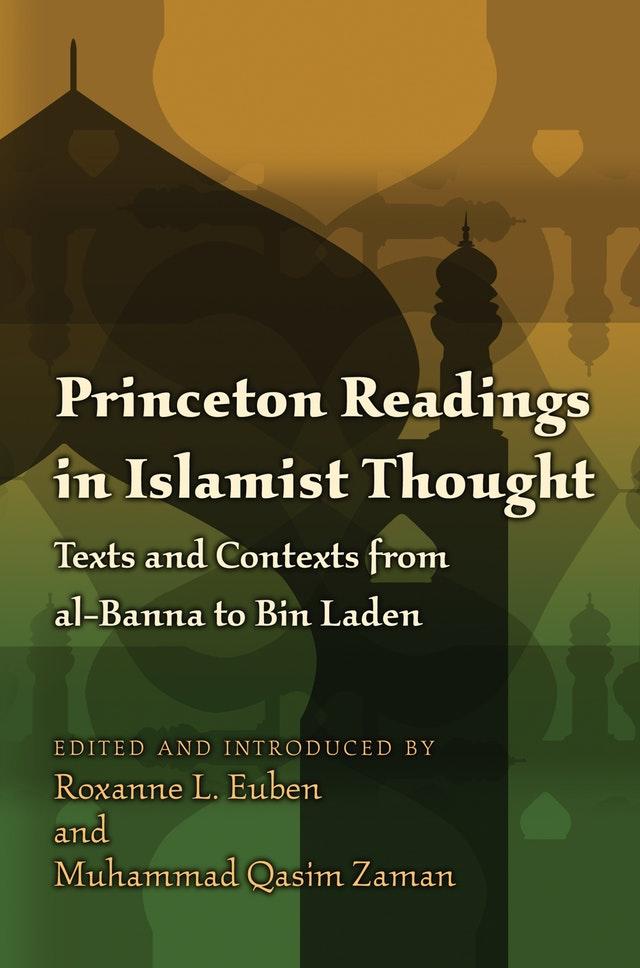 Princeton Readings in Islamist Thought: Texts and Contexts from al-Banna to Bin Laden

This anthology of key primary texts provides an unmatched introduction to Islamist political thought from the early twentieth century to the present, and serves as an invaluable guide through the storm of polemic, fear, and confusion that swirls around Islamism today. Roxanne Euben and Muhammad Qasim Zaman gather a broad selection of texts from influential Islamist thinkers and place these figures and their writings in their multifaceted political and historical contexts. The selections presented here in English translation include writings of Ayatollah Khomeini, Usama bin Laden, Muslim Brotherhood founder Hasan al-Banna, and Moroccan Islamist leader Nadia Yassine, as well as the Hamas charter, an interview with a Taliban commander, and the final testament of 9/11 hijacker Muhammad Ata.

Illuminating the content and political appeal of Islamist thought, this anthology brings into sharp relief the commonalities in Islamist arguments about gender, democracy, and violence, but it also reveals significant political and theological disagreements among thinkers too often grouped together and dismissed as extremists or terrorists. No other anthology better illustrates the diversity of Islamist thought, the complexity of its intellectual and political contexts, or the variety of ways in which it relates to other intellectual and religious trends in the contemporary Muslim world.

“This book is an excellent primer on the key ideas and prominent thinkers that have shaped Islamism over the past century. Euben and Zaman provide the reader with both text and context by pairing selections from key Islamist works with their own incisive analysis. The result is a most useful and timely intellectual history of Islamism.”—Vali Nasr, author of Forces of Fortune: The Rise of a New Muslim Middle Class and What it Means for Our World

“One could find no better guide to this difficult, dangerous, and deceptive terrain.”—Anne Norton, University of Pennsylvania

“This splendid volume literally opens the door to Islamic political thought for Western scholars and teachers of politics. Brilliantly introduced and contextually framed by the editors, the selections represent remarkable geographic and historical range. We are all in the debt of Euben and Zaman for this immense labor and for the subtlety of their own thinking about politics, interpretation, violence, theory, gender, translation, and more.”—Wendy Brown, University of California, Berkeley

“This volume is a real contribution. The selection of texts is first-rate, and the biographical introductions to the individual texts are extremely impressive.”—Noah Feldman, author of The Fall and Rise of the Islamic State

“A superb volume. No other anthology on Islamism provides this depth or breadth. The biographical notes that precede each selection are exceptionally beneficial. These notes do more than just introduce the authors; they explore the background, networks, and issues that link each writer with broad patterns of Islamic political thought.”—Bruce Lawrence, editor of Messages to the World: The Statements of Osama bin Laden