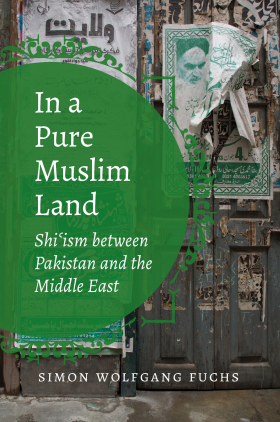 In a Pure Muslim Land: Shi'ism between Pakistan and the Middle East

Centering Pakistan in a story of transnational Islam stretching from South Asia to the Middle East, Simon Wolfgang Fuchs offers the first in-depth ethnographic history of the intellectual production of Shi'is and their religious competitors in this “Land of the Pure." The notion of Pakistan as the pinnacle of modern global Muslim aspiration forms a crucial component of this story. It has empowered Shi'is, who form about twenty percent of the country's population, to advance alternative conceptions of their religious hierarchy while claiming the support of towering grand ayatollahs in Iran and Iraq.

Fuchs shows how popular Pakistani preachers and scholars have boldly tapped into the esoteric potential of Shi'ism, occupying a creative and at times disruptive role as brokers, translators, and self-confident pioneers of contemporary Islamic thought. They have indigenized the Iranian Revolution and formulated their own ideas for fulfilling the original promise of Pakistan. Challenging typical views of Pakistan as a mere Shi'i backwater, Fuchs argues that its complex religious landscape represents how a local, South Asian Islam may open up space for new intellectual contributions to global Islam. Yet religious ideology has also turned Pakistan into a deadly battlefield: sectarian groups since the 1980s have been bent on excluding Shi'is as harmful to their own vision of an exemplary Islamic state.

“Exciting, stimulating, and convincing, this richly conceived study of the Shi'a in the Indian subcontinent raises crucial points about transnational links, religious authority, and doctrinal positioning. Easy and fluid reading, it will appeal to a broad range of readers interested in Islam and its global and transnational history, as well as those focused on Pakistan and South Asia, Shi'ism, and sectarianism—a crucial issue today.”—Sabrina Mervin, French National Center for Scientific Research, Paris

“This unparalleled study assesses the place of Pakistan in global Shi'ism, arguing convincingly that this major center of Shi'i Islam has all too often been cast to the periphery within both academic scholarship and Shiʿi thought itself. Fuchs shows instead how Shi'is have come to understand Pakistan as representing a nascent pure land, where transnational flows of religious leadership and influence all make their mark. The book is a major contribution to our understanding of the dynamics of religious authority, and the complex negotiations of closeness and distance, in contemporary Shi'ism.”—Justin Jones, University of Oxford