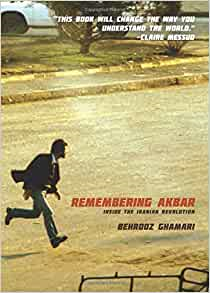 Remembering Akbar: Inside the Iranian Revolution

Set in the tumultuous aftermath of the Iranian revolution in 1979, Remembering Akbar weaves together the stories of a group of characters who share a crowded death row cell in Tehran’s notorious Evin prison. A teeming world is evoked vividly through the relationships, memories, and inner lives of these political prisoners, many of whom were eventually executed.

Told through a series of linked memories by the narrator, Akbar, whose striking candor is infused with a mordant sense of humor, the story takes the reader beyond mere political struggles and revelations, to a vibrant alternative history, written, as it were, by the losers.

The characters whose stories Akbar recounts are brought to life within the mundane rhythms of a bleak institution, in its simple pleasures as well as its frequent horrors, and in the unexpected connections that emerge between the world inside and a past before imprisonment.

Rather than exalting the heroic, or choosing to focus merely on despair or redemption, Remembering Akbar reveals eloquently how life unfolds when death is starkly imminent. It is a deeply moving story of great camaraderie, biting humor, and soulful remembrance.

“Behrooz Ghamari's extraordinary memoir is unlike anything I've read: he bears witness to the terrible suffering and the loss of so many in Iran's infamous Evin Prison in the wake of the revolution; but he does so with tenderness, humor and dignity. This book will change the way you understand the world.” —Claire Messud, author of The Emperor’s Children and The Woman Upstairs

“With his keen sensibility and rich personal experience Ghamari has crafted an unforgettable book, charting a course through the bitterness of oppression and survival into a resonant form of resistance.” —Elias Khoury, author of Gate of the Sun and The Broken Mirrors: Sinalcol