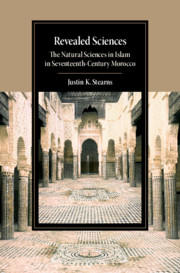 Revealed Sciences: The Natural Sciences in Islam in Seventeenth-century Morocco

Preface: paths not taken
Introduction: Narratives of science, old and new
1. A landscape of learning in the far west
Excursus: the poverty of intellectual history as a series of great men
2. Constructing science in Morocco between the sixteenth and eighteenth centuries
Excursus: the horizons of causality: how to think about causes, nature, and ghosts of scientific methods
3. Legalizing science: the authority of the natural sciences in Islamic law
Excursus: Kuhn and the history of science in Islamicate societies
4. Writing the mathematical and natural sciences
Excursus: Sufism and the spiritual life: balancing the exoteric and esoteric sciences
Conclusion.

‘Stearns exhibits a scholarly mastery over the subject of natural sciences in seventeenth-century Morocco with each section illuminating a dark spot in the history of science.’ Usman Butt, The New Arab